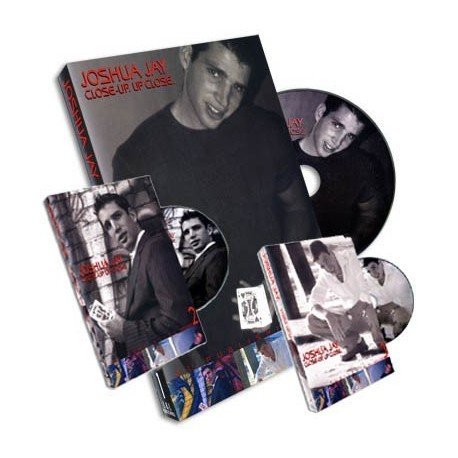 Joshua tips the work on his twelve-minute act, including his Ambitious Card and borrowed ring routines. Heâ€™s performed this award-winning act all over the world, and now youâ€™ll have a peek at the thinking behind it. Also included are performance clips from his acclaimed one-man show, a detailed study of his Discreet Displacement sleight, and a special screening of The Heckler, Joshuaâ€™s magic-themed short film.

Losing Diamonds: Visually flick the pips off the wrong card and change it into a signed selection.

The Remote Control: A signed card is controlled by a remote held by a spectator. The routine climaxes with the discovery of the same signed card inside the remoteâ€™s battery compartment.

The Aspirin: The opener and closer to Joshuaâ€™s actâ€”produce an aspirin bottle and later reveal a signed selection insideâ€¦without ever touching the bottle.

The Discreet Displacement: This easy-to-do sleight can be used as a control, force, or switch. Youâ€™ll learn several effects possible, includingâ€¦
Discreet Displacement Collectors: An in-the-hands version of this Roy Walton classic that takes place in less than a minute.

Ringinâ€™ Alarm: A borrowed finger ring (and a ring fingerâ€”no joke) is discovered inside an alarm clockâ€¦just in the nick of time!

Plus: The Jay Change, D.D. Thought-Of Card, and lots more.

Extra Feature: â€œThe Heckler,â€ a short, fictional film written, starring, and co-directed by Joshua Jay. This is what happens when you mess with a magician.

The material on this volume ranges from close-up to stand-up, from easy to difficult, and from cards to coins to ropes to tape measures to bills. But from start to finish, itâ€™s all audience-tested and approved magic. Also included are performance clips from Joshuaâ€™s one-man show, a detailed discussion of practical memorized deck magic (that wonâ€™t disturb your stack), and a making-of featurette.

Shrunken Revelation: Joshua has performed this trick on national television in four different countries and it won first place in the Marvinâ€™s Magic video competition at FISM 2000. Four Kings appear on four packets and then visually shrink to miniature cards.

Inflated Transposition: A dollar bill transposition with a new kickerâ€”impromptu, easy-to-do, and perfect for walk-around professionals.

Heightened Senses: Predict any spectatorâ€™s height with an â€œXâ€ on a tape measure. The method is as ingenious as the effect!

The Lampshade (performance only): Straight from his one-man show, this is Joshuaâ€™s acclaimed chop cup routine to music using a lampshade and a bulb.

Pulling My String: The perfect opener to any rope routine. Stretch a tiny rope over seven feetâ€¦visually.

Dear Journal: This trick won the IBM creativity award in 1998. A â€œjournalâ€ deck is shown, each card bearing a different journal entry. Joshua divines not only a selected â€œjournalâ€ card, but even what entry is written on it!

Plus: Princess in my Wallet, Invisible Coin Purse, Jumbo Homing Card, Prediction Piece, Combined Interests, and a detailed discussion on memorized deck magicâ€”from the point of view of a worker. Youâ€™ll learn the work Joshua puts in the deck, an extremely deceptive in-the-hands false shuffle, and several routines that donâ€™t disturb the stack.

Extra Feature: A behind-the-scenes documentary detailing what happened behind the cameras at every stage of Close-Up. Up Close.

Volume 3 explores Joshuaâ€™s favorite genre: formal card magic. Itâ€™s Joshua Jay, a deck of cards, and an astounded audience. The range of effects is equaled only by the range of methodsâ€”Joshua uses a clever blend of subtlety, sleight-of-hand, and gaffs for maximum impact. Also included is a detailed study of Triumph, the Bluff Pass, and extra footage of Joshuaâ€™s gambling exposÃ©, shot in a live theater.

Trumped Triumph: A Triumph routine with an unbelievable climax. This utilizes a fascinating principle and other ideas are included by Darwin Ortiz and Karl Heinn.

Back in Time: Joshuaâ€™s workhorse Triumph routine. The presentation, the structure, the sleights, the timingâ€¦itâ€™s all worked out, ready to become your go-to card routine.

Pseudo Centers Transpo: Who said everything had to be easy? If youâ€™re willing to put in the time, this routine will have your audience convinced youâ€™re a master mechanic.

Plus: Triumph in Aces, Paradise Aces, The Book Cut, DÃ©jÃ