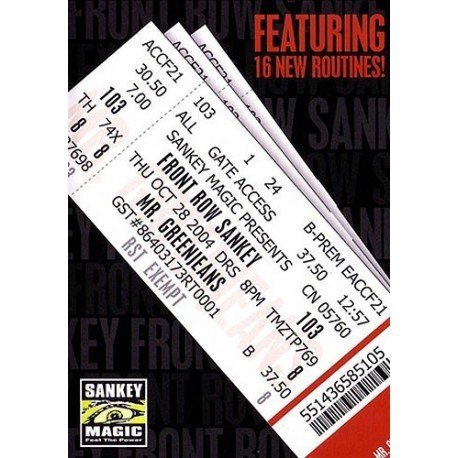 See Jay like you've NEVER seen him before! Performing a killer collection of 16 BRAND NEW effects for honest-to-goodness LAYPEOPLE in a real-life performance setting! No studio audience! No special camera angles!

Taped live and unrehearsed in the fall of 2004 at Toronto's Mr. Greenjean's Restaurant and Bar, this is an extremely rare opportunity to watch Jay "hit the tables" with his unique, off-the-wall, improvisational style. If you work for real people, this DVD is an absolute MUST

Witness breathtaking magic and mentalism with playing cards, coins, paper matches, autographs, geometric shapes, flash paper and rubber bands. Then learn as Jay teaches each of these closely-guarded "real world" pet routines with his most in-depth explanations EVER!

Fan Mail: The spectator's and the magician's autographs visually change places!
Full Lotus: An inexplicable exchange of a folded joker and a signed card!
Shake & Bake: The coin production that proves, "Hearing is believing!"
Slow Motion Coins: A "coins across" effect as deliberate as it is deadly!
Not This Card!: Jay's favorite handling of Frank Everhardt's "Chicago Opener!"
Shape of Things to Come: A heartstopping, double-climax mentalist's dream!
Real Magic: Freshly written words melt through a dollar bill!
Hypnotarized: A hypnotized spectator starts seeing some truly weird sh*t!
Litmus Test: A blank card first gains, then loses an identity!
Close Contact: Two spectators, one card, and an astonishing occurance!
Deviant Behavior: Four jokers escape from the pack in a most elegant fashion!
Out of Sight: A deck production combined with a bizarre mental routine!
Vital Signs: Paper matches travel in and out of the spectator's fist!
The Phoenix Effect: Fire + mentalism + a signed card = a reputation maker!
Inseparable: The last word on linking rubber band routines!
One of One: A drawing and a playing card undergo a startling transformation!