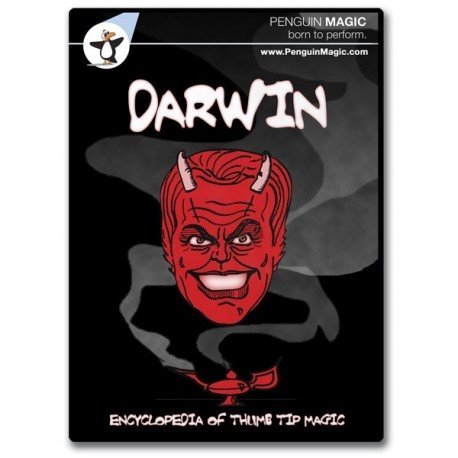 "...that's the first thing you do in the morning... make sure you have your Thumb Tip with you... then you're ready to go out and conquer the world." -- Gary Darwin

This incredible new DVD set will give you dozens of original and unexpected effects that you can perform professionally. Plus, it'll give you a handful of effects that will fool even the most seasoned magicians. If you thought the thumb tip was just for vanishing handkerchiefs, get ready to feel like the cockroach Darwin brings back to life at dinner (Volume One). This is the ULTIMATE work onTHE ULTIMATE UTILITY GIMMICK.

Filmed in Las Vegas at four venues: The Penguin Studio, The Penguin Close-up Stage, Darwin's legendary Las Vegas Magic Club, and Darwin's Magic Museum. We go wide, close-up, and over-the-shoulder to make sure you catch all the action. You'll feel like you're sitting in Darwin's living room learning from the legend himself. There's never been a DVD set of this scope produced on the Thumb Tip, and there will never be another Gary Darwin. This is an incredible opportunity to share Darwin's passion for the Thumb Tip and bring hundreds of new ideas into your act.

The THUMB TIP is here like never before. These three DVDs will go down in history as proof that this is the most powerful tool in the magician's toolbox.

On Volume One you'll learn:

The History of the Thumb Tip

These DVDs are dedicated to Siegfried and Roy -- Gary Darwin

About the Magician: Gary Darwin

First trick: Darwin's grandfather performed a cigarette vanish for a six year old Darwin. A year later a family friend, Professor Lamont, plucked a silver dollar from his ear. From that moment Darwin was hooked on magic. Today Darwin is one of the top performers in Las Vegas. He is also a consummate collector, researcher, inventor, organizer, and writer.

Darwin's professional credits include performances at the Stardust, the Lido, Caesar's Palace, the Silver Bird, the Flamingo, the Desert Inn, the Mint, the MGM Grand, and resort hotels in Reno, Lake Tahoe, and Canada.

Darwin owns one of the largest magic libraries in the world. There are over 10,000 books in the library in addition to autographs, posters, and other magic related memorabilia. Darwin's home is a museum of all things magic.

Darwin is also the founder of the Darwin Magic Club. The Club has met every Wednesday Night for over 39 years. The club has over 500 members, and its roster includes many of the biggest names in magic.