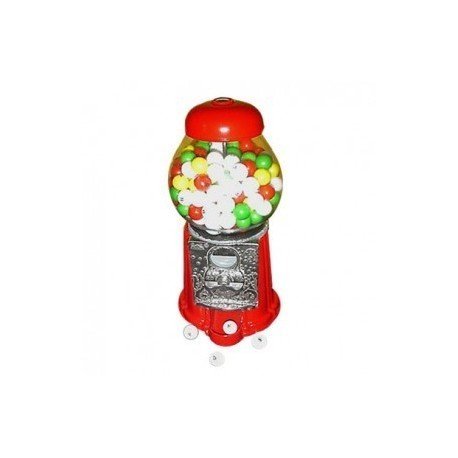 Once again, Devin Knight and John Moyer have teamed up to bring you a new improved version of their Gumball Poker machine. This is one of the most novel ways ever devised for doing both mental and card effects.

Sleights appear impossible as the hole cards come from the machine, and the hands to play are freely chosen by the spectators.

Spectator shuffles cards. Either the magician or the spectator deals out 3 poker hands face down. Spectator is given a free choice of any hand (NO FORCE OF ANY KIND). He then turns the hand over and is asked to play by discarding any card (as he would in draw poker). Magician states that instead of the deck, the person will put a quarter in the gumball machine, and the value on the gumball will be his HOLE CARD.

He asks the spectator what would be the best card he could get. Say he says "four". He puts a quarter in the machine and turns it, and out comes a gumball with a 4 on it, giving him the winning hand he needs!!!

IMMEDIATELY you gather up the cards and deal 3 more poker hands. The person is AGAIN given a free choice of any hand to play, discards what he doesn't want, and once again inserts a quarter into the gumball machine. Yes, the value on the gumball that comes out is what he needs the most to have the best winning hand possible! Magician never touches the gumball machine during the trick, and the selection of what hand to play is a totally FREE choice with NO FORCES of any kind.

TWO KILLER ENDINGS ARE POSSIBLE FOR A CLIMAX

1 - Spectator gathers up the cards and shuffles them. The magician NEVER TOUCHES the cards at anytime. The person selects a card (no force of any kind) while the deck is in their hand. They then cut and lose the card in the deck. Magician ask the person the total of the values on the two gumballs that came out at random. Say they total 12. The person counts down 12 cards and there is the very card they selected!

Remember the magician never touches the deck, and the person really shuffles the deck, yet the gumballs locate the card they freely selected. This routine will fool seasoned magicians.

2 - The 2nd possible ending. A sealed JACKPOT envelope is given to the person to hold BEFORE the poker deal effect. The cards are gathered up, and the person is asked to select a card in a fair manner based on the values of the gumballs. They are given a FREE choice in how the card is selected. You point out that if they do things differently a different card will turn up.

Magician NEVER touches the cards. Person turns over the card they selected and it matches the card in the envelope.They remove the card, not you. No switches, no extra cards in the deck. Deck completely ungimmicked and everything can be examined. No trick cards. Once again this will fry seasoned magicians.