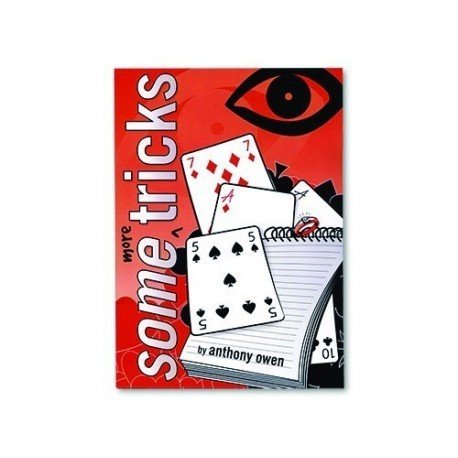 This 44 A4 page book is Anthony's follow-up to his acclaimed Some Tricks features more unique, previously unreleased material from the man Derren Brown describes as "an unsung genius".

The performer openly displays two decks of cards - one red backed and one blue backed. A spectator from the audience is randomly selected and invited to join the performer. They are asked to merely think of a playing card and to confirm that it is a decision which they have made at that moment and that they have never discussed the selection of the card with the magician or anyone else beforehand.

The performer explains that they are going to attempt to cause that card - while it is still just a thought in the spectator's mind - to jump invisibly from the blue deck into the red deck. After a magical gesture the spectator is asked to count through the blue deck and to stop when they see their thought of card. They count through all the cards - there are only 51 - and confirm that they have not seen the card which they are thinking of. It has vanished from the blue deck!

The performer removes the red deck from its box and at this point for the first time the spectator names their card. The performer spreads through the deck face up to find the red backed named card. They continue to spread through the remaining cards to reveal a single face down blue backed card. This is removed and turned face up to reveal that it is the spectator's thought of card!

This is based upon the effect which Anthony created for Geoffrey Durham which he performed on Channel Four's Countdown.

The performer explains that they are attempting a new trick and so will need to refer to their notebook to remember what they're doing! Despite this they manage to successfully make a spectator's finger ring vanish. Amazingly it re-appears linked onto the notepad's spiral binding which needs to be snipped open with wire cutters so that the spectator can be reunited with their ring.

This effect was created by Anthony for Stephen Mulhern to perform on SM:TV.

Members of the audience are invited onto the stage and the performer explains that they are going to participate in a magical version of a reality television show with the audience getting to decide on the nominations and evictions! Each of the on stage contestants are given large name badges and appropriate pieces of attire and props in keeping with well-known reality 'stars'. Each of their names are placed into a bag and mixed. Members of the audiences then draw out nominations two at a time for other audience members to decide who is evicted. Finally when only two contestants remain the entire audience votes on who should win. Amazingly, despite such an apparently free choice, the performer reveals that he had correctly predicted the winner - twice.

This effect was created by Anthony with Pete McCahon and Richard Pinner and was performed by Pete in series one of Monkey Magic.

The performer makes a cup of coffee - pouring hot coffee, milk and a lump of sugar into a cup. The performer drinks the contents and then proceeds to 'unmake' the coffee in their empty mouth - spitting out separately - milk, clear water, a sugar lump and coffee granules!

OUT OF THIS HOUSE

This is Anthony's handling of Paul Curry's 'Out of this World' which can be performed with a shuffled regular deck, which you deal face down into 'Reds' and 'Blacks' as requested by the spectator - and they are 100% correct - without having to stop-and-swap halfway through!

THE AMAZING KARATE PENCIL OF DEATH

This is Anthony's acclaimed handling for pencil through coin in which the spectator is actually able to remove their marked coin from the pencil themselves!

John Lenahan: "Whenever I read a book by Anthony Owen I'm reminded of those great books by Lewis Ganson that I loved so much. From the practical to the ridiculous Some More Tricks is filled with gems. These are not notebook flights of fancy, every trick has either been performed by Anthony at our club (Monday Night Magic London) or by a magician on one of the millions of TV shows he has produced. I'm putting Big Survivor directly into my cruise ship show. If anybody has the guts to do the Recaffinated Coffee trick for restaurant walk around – call me so I can come see it."

"What I like about Anthony Owen's work is that he publishes full-blown performance pieces, complete with a script and all the necessary details. Some More Tricks contains six such pieces: 'Big Survivor 2' (a prediction effect for the stand-up performer, based on the popular TV show), 'Re:Monition' (a very clever version of Eddie Joseph's 'Premonition'), 'Ring on Notepad' (the title says it all), 'Recaffinated Coffee' (a very strange effect in which the magician drinks a cup of coffee, then regurgitates the separate ingredients - coffee granules, milk, water, and a lump of sugar), 'Out of This House' (a version of Paul Curry's 'Out of This World' performed with a legitimately shuffled deck), and 'The Amazing Karate Pencil of Death' (a handling of 'Pencil Through Coin' that features a great moment when the coin is pulled off the pencil). A few of these routines will require that certain gaffs be constructed. In particular, 'Re:Monition' will cost some money to manufacture. Only intermediate technical skills are required.

"If you are looking for offbeat, professional calibre material, Some More Tricks is worth your serious consideration."

Jonathan Goodwin (Monkey Magic's The Colonel and Consultant Producer on The Secret World of Magic): "Anthony is one of the most formidable and creative minds in magic, I have first hand experience of his genius. Read "Some More Tricks" and you will see what I mean."

Marc Paul: "Anthony has a unique ability to invent stunning effects that tap into modern culture and invent direct - and, in most cases, easy - methods to achieve his goals. Who else could think of an effect involving Big Brother stars?"

John Archer: "This book is just like me - clever, witty and underpriced."

Nicholas Einhorn: "Originality in plot, method and thinking are a rare mix. Some More Tricks is a refreshing read and whilst the card magic is nothing short of excellent the balance of the book is a great source for some cool non-card effects that will certainly turn heads and get people talking."