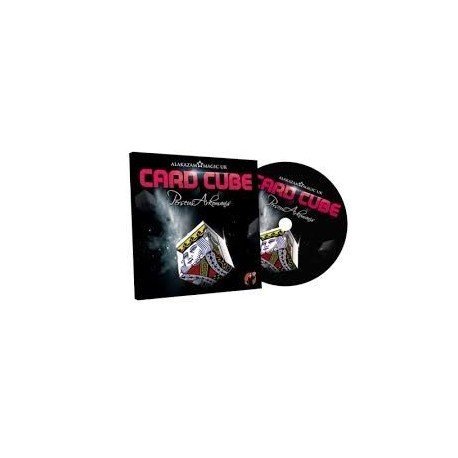 "I love effects like this... where the spectator can see something truly impossible, and then gets to take it home with him!" - Michael Ammar

One of the best principles in magic is that of the impossible object. You take something normal and bring it to an impossible state...and then give it away as a souvenir!

The Coin Bend, Anniversary Waltz & Card Warp all fall under this category but now you can add The Card Cube to this great list of magical effects!

As one of the few full working professional Magicians in Greece, everything Perseus creates is devised for real-world audiences! Tried, tested and worked to its finest detail!

The Card Cube is one of the most original plots in magic!

There are a number of effects where the magician borrows a bill and makes an origami fold of it either visually or as a magical effect, but none has ever combined that with a pack of playing cards!

Perseus spent nearly a year figuring out an easy-to-do fold of a playing card to create a cube without any sticky stuff or glue!

Card Cube can be performed almost impromptu as the cubes only take a minute to make.

Card Cube can be performed as a stand-alone effect or as a killer ending to a card routine!

Card Cube can be performed as a magical effect or as a demonstration of skill! The Card Cube is bound to become one of the modern magic worker's classics! A wonderful magical moment and a great souvenir is the recipe for success!