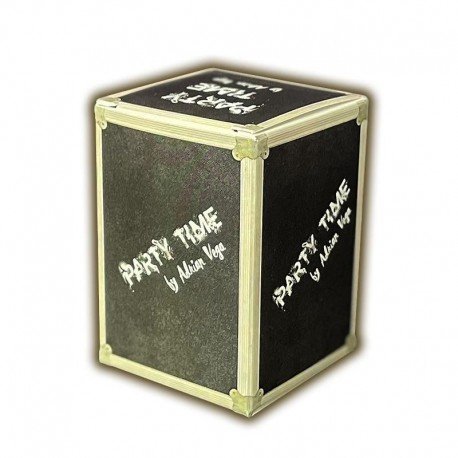 Adrian Vega has done it again! From the creator of Scaandal, Deck Stab, The Poliza and much more… and after his success release, called Profiteer, inspired by a Mystery Box without a box, now Adrian Vega shares with you his super organic version, using just a shoot glass covering the folded card, in full view from the beginning… and NOTHING ELSE!

Party Time allows you to perform the classic signed card in the box plot, or any Open Prediction. Imagine showing a card, folding in quarters clearly, and leaving it under the shot glass. Now, you do your favorite routine with a signed card, and end it showing that the folded card was the signed card from the START!

But that it is only an example, Adrian Vega shares with you different routines, including a transposition where you show a Joker under the glass, and suddenly the signed card turns to the joker, showing that the card under that glass now it is the signed card!

Just watch the trailer and see how beautiful, organic and visual it is this effect!  A joy for your eyes and super “invisible” for you audience. Everything is ready to go directly from the box. And as an extra, Adrian Vega wanted to share with you TWO GIMMICKS READY, one in red and other one in blue, so you don’t have to worry about which deck to use.