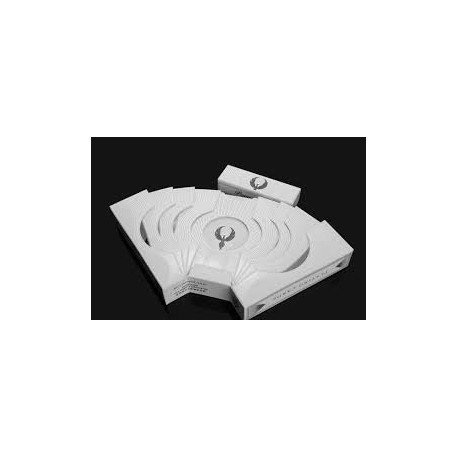 The Noble Phoenix is basically the white edition of Dark Phoenix.

- White and silver hot stamp foil with fine line 3D Layer Engrave.
- ONLY 2500 sets of Noble Phoenix printed, and it will never ever be reprinted in the future.
- Printed by USPCC on Bee Stock Premium Paper with Air-Cushion finish.

There is a legend that said a phoenix is the messenger of good fortune. Every 500 years, it collects all the worldly hardships, grievances and hate and turns them into happiness and prosperity by throwing itself into the raging fire. In China, the sacred and auspicious phoenix, alongside the imperial dragon, is worshipped and celebrated by the nation due to their connection to the hope for a good life and deep love. They say that when a phoenix spreads its majestic wings, the surroundings are blinded by the brilliant sunlight reflecting off them.

THE ICONIC BOX
The rebirth of the phoenix is closely tied to the force of the sun. The fan-like design of the box represents the illusion of the phoenix soaring into the sunlight very well. Each of the rays, each of the arcs brings its magic closer to you.
According to the legend, as the phoenix struggled in the fire, it started extending its wings into the sun. Its gorgeous feathers shined brilliantly as it soared up, towards Nirvana.