> Archangel by The Enchantment
Προσφορά 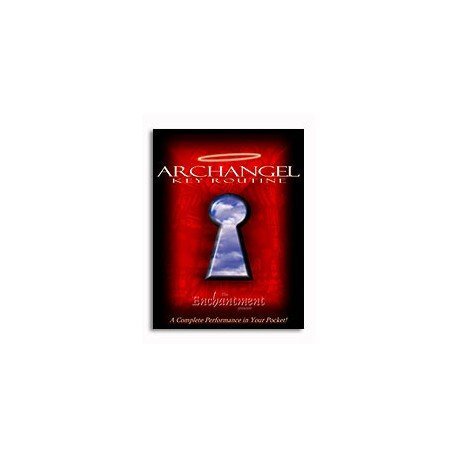 Archangel by The Enchantment

A Complete Performance in your Pocket!

From The Enchantment, the creator of the highly successful Dreamweaver, comes another Anytime, Anywhere, multi-phase routine that is destine to be a classic. Archangel is the culmination of three highly commercial effects seamlessly implemented into one finely-tuned routine that is as amazing as it is memorable.

3 Keys - One Door
A member of the audience becomes faced with a difficult decision when she must choose between three keys. With a completely free choice, her decision proves to be the very key the performer predicted days before the routine began. A three-out effect so easy and convenient to carry. Unlock the door and enter the next phase…

Angel Flight
End your performance with a real crowd pleaser, and one of the most impossible flight effects ever devised. In a blink of the eye, the signed bent key completely vanishes only to be found hanging on the keyring of the performer's keychain. Not a ring flight, but a key flight - which makes sense! The key is 100% on the keychain and is removed by the spectator!

This is truly high caliber material that has bewildered some of the keenest minds in the business. Whether you are a magician or a mentalist, this is a hard-hitting affair that will raise your craft to a higher level. Requires you to supply your own keys, as after each performance you will be giving away a truly memorable souvenir in an impossible condition. Included in the book is a surplus of extra advice and additional performances. Including, a key flight where the signed bent key is found on the performer's keychain that has been in full view on the table the entire routine!

Don't forget the best part. The entire routine is self-contained on the special keychain and is ALWAYS ready to perform without even a moments notice. So the next time someone asks you to show them something, don't just do a trick, put on an entire show!

Mentalism, metal bending and a flight all on one keychain!
Archangel is a real world routine you will have with you the rest of your life.