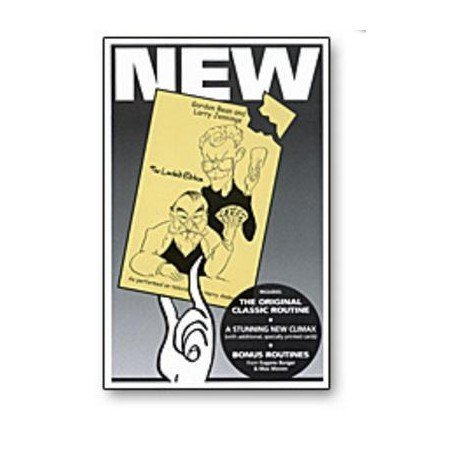 Back in 1995, Gordon Bean released The Limited Edition in conjunction with Larry Jennings. Spurred by a prime-time performance by Harry Anderson, it quickly became a best-seller. Eugene Burger and Br. John Hamman were among those who worked out their own versions, and the effect went on to become a modern classic: After the spectator thinks of one card among six, that card alone goes blank!

Noticing that occasionally some spectators would ask if he could bring their card back, Gordon went work on a new version to make this possible. Until now a closely guarded secret, the end result is nothing less than a miracle: A spectator thinks of one card among six, and is asked to mentally tear a corner off the card, then make the rest of her mind blank. Without the selection being revealed, the cards are spread face down, and one card is seen to be missing its corner! When the faces are shown, the spectator confirms that the card missing its corner is what remains of her card. For the climax, the spectator mentally sends the torn corner back to the box, where it makes a magical appearance!

Still completely self-working, The New Limited Edition contains the original cards and routine, along with the extra cards necessary for the new climax. All of the cards were specially printed by the U.S. Playing Card Co. on Bicycle stock and no refills are needed. Also included is a card for another addition to the original effect: Before going blank, the back of the mental selection starts to visually fade away! The new instructions also include Eugene Burger's description of his routine for the original Limited Edition, as well as ideas from Max Maven for both the original and new versions of the effect.

Comes complete with all the necessary cards on Bicycle stock and 10-page, fully-illustrated instructions.