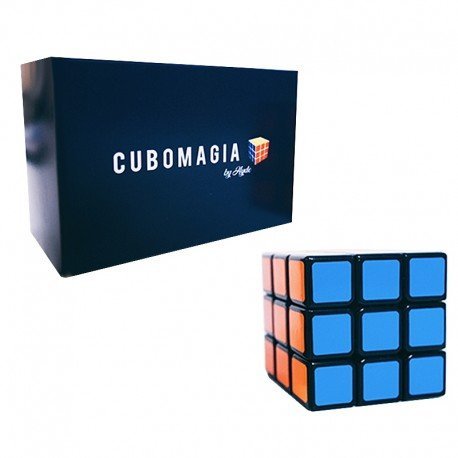 "Cubomagia" is one of the best DVD that deals with magic effects using the Rubik's cube. In it you will find new  original effects that are perfect for amazing  any kind of spectator.

All the contained effects have been conceived and realized by Hyde, one of the greatest Italian exponents in the sphere of magic with the Rubik's cube.

The DVD is perfect both for those who want to learn how to make magic with the Rubik's cube from scratch, as for those already experienced in this field.

"The work that was behind it was incredible, it took months and months of hard work to complete everything  in the best way possible. I modified, changed and discarded different routines before getting to the final result, but now I can say that I am more than satisfied. I am very happy to finally be able to show you my work, I want to thank all the people who in one way or another contributed to the development of Cubomagia. - Hyde"

CUBOMAGIC CONTENT:
• A Rubik's cube;
• 6 white cards necessary to perform one of the routines;
• Credentials to access video content (link video). The explanations are in Italian with English subtitles.


This contains within it effects with relative explanation, in particular:

- "Resolved or mixed?", An effect that has become famous as: "the Rubik's cube magically resolves by passing it behind the back". This title already explains the effect.
- "Color Cube", the viewer will choose a color of the Rubik's cube and a cube, previously mixed and left in a bag, after choosing the color will have one resolved face of that color and the others all mixed.
- "Your Number Solve", the Rubik's cube will be solved exactly in the number of moves chosen by the spectator.
- "Rotation Solve", the mixed cube resolves magically and instantly in front of the spectator's eyes.
Two variants.
- Extras with all the details to make magic with the Rubik's cube in the best way.