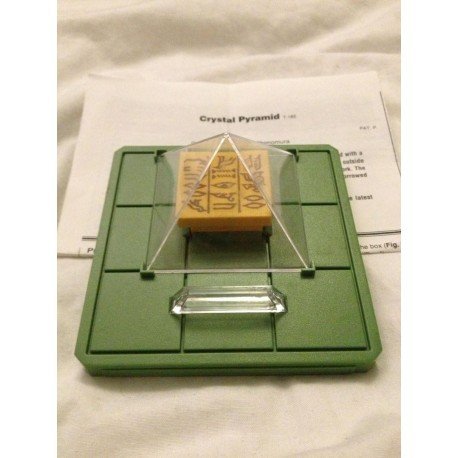 Result of visitor's ratting / Résultat du sondage:
Effect : 15,8/20
Design : 14,3/20
Quality and finish : Good / Bonne
Discontinued / Production terminée
English:
A small alter, in the center of which is a closed box, and covered with a crystal pyramid. A borrowed coin (which may be marked) is placed on the altar, outside of the pyramid. Now it is time for the powers of darkness to do their magical work. The pyramid is covered with a small handkerchief, and a moment later. The same borrowed coin is inside the box inside the crystal pyramid!

Development story:
Spirit magic is not visual generally. Tomoyuki Shimomura searched for a way to make spirit magic have a strong impact visually, and finally came across a spirit box-type effect. In this type of routine, a curtain is closed in front of a large wooden box. As soon as the interior of the box is out of sight, spirits appear inside and cause a whole bunch of mysterious effects, such as placing a ball inside of a cup. Various conditions were imposed on this trick, such as "able to be performed close-up, with a coin," and "the gimmick must be built-in, and must be operated with a single touch." After having developed the mechanism and its incorporation into the props, we decided to produce this trick with a lid that is shaped like a pyramid. This decision also introduced the intriguing presentation used today.

Trivia:
The purple version is the one that was sold at FISM 1994, after the color changed andultimately it is the green version that has been widely produced and distributed worldwide.