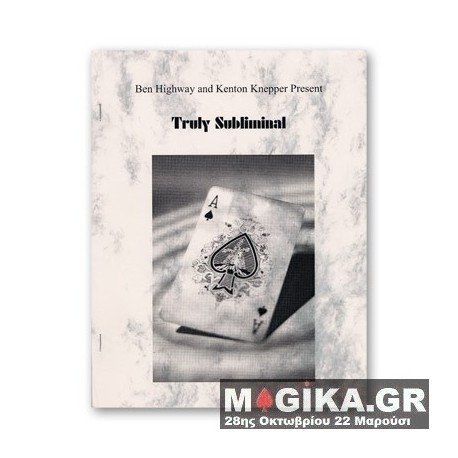 Once again Ben Highway and Kenton push past the barriers of what can be done in mentalism and magic. Like Kolossal Killer before it, this brings a new standard to dealing with spectator intuition and free spectator choice, challenging all previous methods.

A card is selected and returned to the deck. The deck is cut or mixed. It's NOT a card trick. It is a real demonstration of subliminal influence.

The spectator deal cards face up on to the table, stopping whenever they feel the need. They are not to think about when to stop, but rather to stop when they feel it is time to stop. In other words, the participant must stop dealing using only his or her own intuition.

The effect may vary slightly, but in any case the effect is that the spectator is influenced by subliminal impression to stop dealing and find his or her own card.

The method is even more amazing than the effect, and that's saying a lot.

This is as real as it gets to demonstrating intuition and subliminal influence, because this is in part how the effect actually works. Yes, we are very serious. It's little wonder audiences are completely floored.

Kenton and Ben Highway have had everyone wondering whether or not they were "just lucky" when they performed this effect for mentalists and magicians in several countries. It isn't luck, friends. It's a devious secret you won't believe until you try it.

Ben and Kenton have worked out all the angles so that you will never fail. It's simple and easy to perform. The audience and participant will always be impressed with their ability to tune into subliminal influence or use their intuition.

No conscious cues, no stooging, no trick deck. The spectator is as impressed as the audience. Standard and basic sleights are required only, plus a secret bit of something that will blow you away when you read it.

Just wait until you try it a few times! This is unlike any other method on the market today. It will change how you look at spectator influence forever.

We know Truly Subliminal works wonders on our audiences - Find out how well it will work for you too! The novel breakthrough that has them all talking...