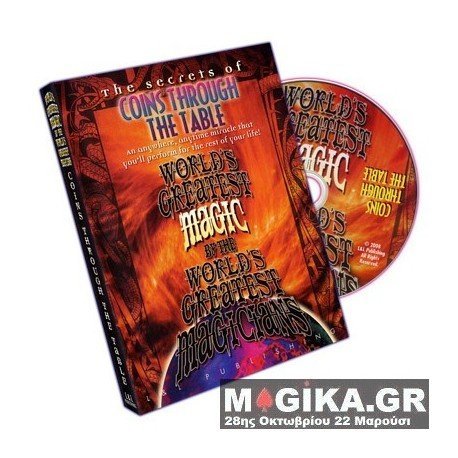 "By and large, this is an excellent treatise on the Coins Through Table...There are countless versions of Coins Through Table in the literature, but if you want a survey of some of the best, this DVD is a great place to start." -Jamie Sanden, MyLovelyAssistant

If you could have one set of magic DVDs, this would be it! This benchmark collection features just about all of magic's most enduring and classic effects and routines. It's a fabulous compendium with many of the top masters in the world of magic teaching their handlings and routines for some of magic's classics. Linking rings, sponge balls, metal bending, cups and balls, thumb tips, Zombie, color-changing knives, and many, many more topics are all gathered in this one terrific DVD reference set. Each volume covers a specific subject and features new, old, and sometimes rare footage by some of the top video producers in magic.

An anywhere, anytime miracle that you'll perform for the rest of your life!

Since entering the literature of magic in the 1600's, the effect of passing coins through a solid table top has captured the imagination of magicians and has led to countless variations and versions. The trick's inclusion in the repertoires of some of close-up magic's most illustrious performers speaks to its utterly mystifying effect on an audience.

In this volume, you'll see eight different versions of this close-up magic favorite with different methodologies, presentations and even finales. David Roth begins a performance and exposition of the original Al Baker approach of passing the coins through the table one at a time while Gary Ouellet presents Dai Vernon's version from Stars of Magic. Steve Dacri demonstrates a version taught to him by Slydini and refined by Vernon while John Mendoza uses six coins rather than the traditional four and finishes the routine with an unbelievable final production. David Roth returns with the traditional Han Ping Chien technique for passing three coins through at one time followed by Larry Jennings with a wonderful no-lap method. Johnny Thompson presents his own version of the Baker routine followed by an in-the-air transposition of three coins ala Han Ping Chien, while David Regal presents an innovative method - and presentation - for this close-up classic.

Passing a solid object through another solid object has always been a favorite plot of magicians and the commonness of coins and tables only adds another layer of mystery and fascination to it. Learn one (or more!) of these methods and you'll be ready to entertain and bewilder anyone at anytime with objects that are completely ordinary and familiar.
Running Time Approximately 1hr 30min