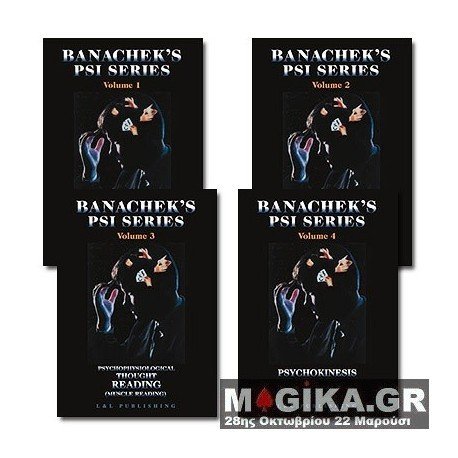 Make a pen stand up and write the exact word a spectator is thinking . . . all by itself! Predict a corporate image chosen by a CEO! Reveal the serial number of a borrowed dollar bill. All these and more are included in this DVD.

These effects run the gamut from psychokinesis, telepathy, predictions and psychological influence.

or the professional stage. Here Banachek presents mentalism like a home-cooked meal . . . something for everyone and sure to be

enjoyed by all. From mentalism to mental magic, Banachek shows how to make mentalism fun and friendly.

Meet Banachek in a personal interview and learn how he started in mentalism and how his career developed as he traveled from England to South Africa, ultimately immigrating to the United States.

Make the value of a spectator's playing card slowly appear on your arm in blood red . . . anywhere, anytime! Reveal a thought-of number from across the distance separated by phone lines. Engage two people in a fun routine where the performer predicts a

page number and a word seen by a volunteer on an invisible Palm Top computer. Become a human lie detector in a thrilling and

comical adventure. This DVD continues from Part 1 with close-up, stand-up and stage mentalism and mental magic with additional

direction and sleight-of-hand into one smooth effect. Also, learn the inside secrets of what Banachek considers one of the most

powerful tools in the mentalist's arsenal, Pocket Writing. This DVD includes Banachek's discussion of his Buried Alive escape, his

Bullet Catch illusion now used by Penn & Teller, the difference between mentalism and mental magic plus comical anecdotes about

blindfold drives. You will also see a television clip of Banachek's Buried Alive escape hosted by William Shatner and TV footage of

one of Banachek's early Blindfold Drives.

Do you want to find a needle in a haystack? Using the power of your mind and a little help from your volunteer, you can find anything through your heightened sense of touch. Almost anything you can do in mentalism can be re-enacted using Psychophysiological Thought

Additional material included in personal interviews explain how to work with agents, getting booked on the college circuit, trade shows and

restaurants, performing on the radio, getting publicity, using disclaimers, accepting challenges and more.

Learn how to bend cold, hard steel with the "power of your mind." Make physical objects move, twist and curl up like a wet noodle at will. In true Banachek style, each move, gesture and psychological subtlety is covered in detail. This DVD stands alone from Banachek's previous work by presenting new, additional details and methods on bending silverware. This also includes methods of bending coins keys, nails, and spikes plus moving objects like pens and pencils. Included is the true story behind Banachek's participation in the Alpha Project, a four-year study that culminated with scientists validating Banachek's "psychic" powers that propelled him into the national spotlight! Effects and Explanations Nail Bends Key Bends Coin Bends Silverware Bends PK Pen Permission & Warnings for Keys Displays (for maximum reactions) Bending Coins The Volunteer Feels It Why Quarters? Putting the Physical Bends in Coins Where to Bend & Display Coins Silverware & Bag Method Spoon Bending (new method) Switching Spoons Stage vs. Impromptu Whose Silverware To Use Angles Pencil PK PK Pen About PK Audience Perception Interviews Alpha Project Too Much Power